READY TO JOIN YOUR TELEMEDICINE APPOINTMENT?

SEND US A MESSAGE
Skip Main Content
Previous | Next

If you led an airline, and you hired a blind pilot, and the pilot crashed your plane and killed 300 people, you would be held responsible.  Why? Because blindness clearly increases the risk of accident, and though you knew this to be true, you hired a blind pilot and risked the lives of passengers.  You might argue that you hadn’t tested the pilot’s vision, so you didn’t know he was blind.  Perhaps you didn’t, but you should have, and your failure to do so violates your most basic duty to society- to respect the lives of others.

Similarly, trucking companies that don’t test drivers for sleep apnea routinely risk the lives of all of us who drive on the highway.    Published studies suggest that sleep apnea increases the risk of car accidents by 21% to 389%.  At least 25% of truck drivers likely have sleep apnea.   Bad outcomes are inevitable.  In May 2010, a tractor-trailer driver with untreated, severe sleep apnea fell asleep while driving and plowed into a line of stopped highway traffic.  The collision left John Lindsay dead.

§391.41 Physical qualifications for drivers ‐ (a) A person shall not drive a commercial motor vehicle unless he/she is physically qualified to do so…

(b)  A person is physically qualified to drive a commercial motor vehicle if that person:

1. Has no established medical history or clinical diagnosis of a respiratory dysfunction likely to interfere with his/her ability to control and drive a commercial motor safely.

The Federal Motor Carrier Safety Administration (FMCSA) clarified this rule to include sleep apnea.  An FMCSA expert panel in 2008 recommended guidelines for screening of commercial drivers.

In December of 2011, the Lindsey family won $3,250,000 from Celadon Trucking Company.  For the first time, a trucking company admitted that its driver’s sleep apnea had caused another person’s death.  I believe that given this precedent, anyone looking to sue a trucking company following an accident will consider the potential role of sleep apnea in the crash.  Companies know the risk factors for OSA- snoring, sleepiness, thick neck, high blood pressure- and should screen accordingly with guidance from sleep experts.  Once identified, OSA can be treated effectively with CPAP.   Many trucking companies are now screening for sleep apnea, and I applaud them.  Those companies that fail to screen for sleep apnea will justly suffer losses of money and reputation. 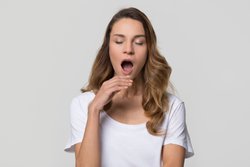 This is Your Sleeping Brain