Residents have two primary tasks during graduate medical training: to care for patients and to learn medicine. Residents must accomplish these overlapping tasks despite acute and chronic sleep deprivation.

Residents have two primary tasks during graduate medical training: to care for patients and to learn medicine. Residents must accomplish these overlapping tasks despite acute and chronic sleep deprivation. Extended duration on-call shifts (greater than 24 hours) impair resident performance and cause patient care errors(1). Sleep after learning enhances retention of facts, learning of motor skills, and development of insight(2). The consequences of 24-30 hour extended duration on-call shifts on memory consolidation and clinical learning in residents remain unknown; in fact, the influence of sleep upon any form of occupational learning is uncertain.  We, therefore, aim to define the relationship of sleep to learning among residents. In this study, subjects trained on clinical and nonclinical tasks, either took their typical overnight call- the call condition- or slept at home- the noncall condition- and tested 48 hours after training upon both sets of tasks.  All residents completed both a call and a noncall condition, and we compared them within-subject learning across conditions.

(should the paragraph below be saved for the discussion portion?)

In concert with their potential impairment in learning, extended shifts are a primary contributor to medical error(3), the sixth leading cause of death in America(4).    Numerous studies, summarized in a 2005 metareview, demonstrate impaired performance in clinical and nonclinical tasks associated with sleep deficit(5). The Harvard Work Hours, Health, and Safety Group (HWHHSG) gathered 17003 surveys from 2737 first-year residents in 2002-2003.  More accidents occurred while driving home from extended than from nonextended shifts (OR 2.3, CI 1.6-3.3)(6).  Fatigue-related errors increased in months requiring 5 or more calls (OR 7.5, 95% CI 7.2-7.8)(7).  Percutaneous injuries occurred more often during extended than during non-extended shifts (OR 1.61, 95% CI 1.45-1.78)(8).  The HWHHSG randomized intensive care unit first-year residents to a “traditional schedule,” where they worked typical shifts (up to 34 scheduled hours) and the atypical number of hours per week (~80) and to an “intervention schedule,” where their longest duration shifts and weekly work hours were significantly shorter (16 hours and 63 hours per week, respectively)(9). On the traditional schedule, interns experienced twice as many attentional failures (p=.02) and committed significantly more serious medical errors (136.0 vs. 100.1 errors per 1000 patient days, p<.001); teams including interns on the traditional schedule made significantly more errors than teams including interns on the intervention schedule (193.2 vs. 158.4 per 1000 patients, p<.001)(1).

Given a growing body of evidence that sleep deficits impair the performance, the Accreditation Council for Graduate Medical Education (ACGME) imposed work hour regulations in 2003(10).  Effects of work-hour regulations upon learning remain unclear.  After the introduction of ACGME regulations, scores on the otolaryngology training examination did not change (11).  American Board of Surgery In-Training Examination scores improved.  American Board of Neurosurgery Scores declined (12). In multiple reports, faculty report dropoff in resident knowledge following ACGME regulations, while residents report little change(13;14).  2011 ACGME regulations, though stricter, permit non-first year residents to work up to 30 hours consecutively and first-year residents to work up to 80 hours per week(15).

Improved sleep-dependent memory consolidation may partially account for stable or improved test scores despite reduced hours.  Over the last twenty years, a growing body of literature has demonstrated a link between sleep and learning(16).  In typical sleep and learning experiments, subjects learn a task, either sleep or do not sleep, and then undergo testing on the learned task.  In no area of learning does sleep appear to have no benefit(17).  Sleep leads to insight into a hidden numerical rule(18).  Rapid eye movement (REM) sleep facilitates anagram solving(19).  Sleep fosters grammatical rule abstraction in infants (20)and the integration of new words into the vocabularies of adults(21).  Subjects gain insight into the “gist” of a list of words with sleep(22).  In word-pair learning, an activity of declarative memory subjects train upon sets of words and provide these words, after a period of sleep or no sleep, during a testing period.  In most cases, sleep improves word recollection(23).  The effect of sleep upon word-pair learning may increase with greater emotional salience (24), less rigorous training(25), and greater slow-wave sleep(26).  In the motor sequence task (MST), subjects repeatedly type a brief number sequence as quickly and accurately as possible and, 12 hours later- after sleeping or not sleeping- retype the same sequence over several trials.  Sequence speed and accuracy significantly (~25%) improve in the sleep condition(27).   Sleep enhances MST performance regardless of what time of day the task was learned (28), regardless of what time of day sleep occurs (28)(as long as it occurs between the training and testing session), and regardless of the level of alertness as assessed by PVT.  Length of stage II sleep correlates positively with MST learning(27). The robustness of learning may depend upon the type of learned material, the type of learning, the type of retrieval task, and the stage and length of sleep following learning(29).

Subjects: We presented our study during first-year resident physician (intern) orientation in the Department of Internal Medicine at Brigham and Women's Hospital in June of 2010.  Our study ran from July of 2010 to April of 2011. 65 Interns initially volunteered for the study.  We excluded ** interns whose schedules did not provide assessment windows meeting our criteria for study participation.  ** Interns began the study but did not conclude all timepoints.  Their data are excluded  ** interns, therefore, participated in our study.  There were ** women and ** men.  Mean (+/- SD) was **+/-*.  The human research committee of Partners Healthcare and Brigham and Women’s Hospital approved all procedures, and all participants provided written informed consent.

Using a within-subjects design, we studied ** interns.  Interns trained on clinical and nonclinical tasks, either took their typical overnight call- the call condition- or slept at home- the noncall condition- and tested 48 hours after training.  Each intern completed both a call and a noncall condition, and we compared within-subject learning across conditions.  During the call condition, only shifts beginning in the morning and ending after greater than 24 hours qualified as “call.”  Interns at Brigham and Women’s Hospital complete many rotations that require such a call.  These include:

We required interns to have two weeks without extended shifts, overnight shifts, or evening shifts before completing each condition.  Work shifts were predicted based upon an online block schedule, generated before the internship began, and confirmed upon each intern’s beginning of each condition.  The training portion of the call condition, therefore, occurred in the day leading up to the first overnight call, following a noncall block, of a new rotation.

**Interns undergo testing 48 hours after each training session.  Immediate post-call testing could demonstrate both call-related learning deficit and call-related performance impairment.  Thus, even the appearance of poor learning associated with call could result from performance deficits known to accrue from acute sleep deprivation.  To reduce such performance deficits, we allow subjects one normal night of sleep before testing.  This night of home sleep reduces the performance effects of acute sleep restriction and isolates sleep-dependent learning.**

We scheduled each intern’s call and noncall conditions at least one month apart to minimize learning effects from one condition to the other.  When schedules’ subjects allowed, condition order was randomized.

All training and testing occurred in the same room at the Neil and Elise Wallace Simulation, Training, Research, and Technology Utilization System (STRATUS) Center at Brigham and Women’s Hospital.  Training and testing occurred between 11 am and 7 pm.  All tasks were performed on standard desktop computers with standard keyboards.  Blinds were closed, and fluorescent lights shone.

For four days leading up to each condition, interns completed a previously validated(9) log of sleep and work hours.  Diary compliance leading up to training day, the number of diaries completed over **x4, was **. Between the training and testing phases of each condition, interns wore a wrist actiwatch, which provided detailed information regarding sleep-wake timing and continued to complete sleep and work logs.  Sleep diary compliance over this period was **%.  Diary-actigraphy compliance/agreement/concordance was **.

All instruments were administered during a 45 minute to 1.5-hour training session and during a 30 minute to the 1-hour testing session.  In the early portion of the study, interns completed only the motor sequence task and the visual paired associates task.  We then added (in September) the video learning task and subsequently (in November) the case learning task.  Interns who began in July and August- and who therefore completed two tasks during the first condition- completed only two tasks at their subsequent condition.  Task order was randomized between interns but remained unchanged from call training day to call testing day, noncall training day, and noncall testing day.

Each subject presses four numeric keys on a standard computer keyboard with the fingers of the nondominant hand, repeating the five-element sequence, 4-1-3-2-4, “as quickly and as accurately as possible” for a period of 30 s. The numeric sequence (4-1-3-2-4) is displayed at the top of the screen at all times to exclude any working memory component. Each key press produces a white dot on the screen, forming a row from left to right, rather than the number itself, to avoid feedback regarding accuracy. The computer records the key responses, and each 30 s trial is automatically scored for the number of complete sequences achieved (speed) and the number of errors made (accuracy). 30 seconds of rest follows each trial, and subjects perform 12 trials.  A complete session thus lasts 12 minutes.  The score (speed and accuracy) from the first trial of the training session is a “baseline” measure, while the averaged scores from the final three trials comprise “post-training” performance.  We define intersession improvement as a percent increase in the number of correct sequences typed from the final three training trials to the first three test trials.  Interns learn one MST (41324) sequence during one condition and another (23142) during the other condition.  Sequences are randomized by call condition.  We assessed  MST improvement, call compared to noncall conditions, within-subject.

Subjects were shown 15 black-and-white face-object pairs with the name of each object displayed under the object.  Each pair was presented for 5 seconds.  Subjects then received a cued recall test in which each face was presented in random order.  Subjects were instructed to provide the correct associated word.  The correct answer was presented for 4 seconds.  If the subject entered a correct response, the pair was not presented again.  If incorrect, the subject sees the picture again.  Subjects trained until they correctly paired 80% of pictures with words.  At retest, subjects were shown the pictures again and provided answers.  Total number of words recalled correctly out of 15 at retest comprised the score.  Interns learn one face-pair set during one condition and another during the other condition.  Sets are randomized by call condition.  We assessed VPA improvement, call compared to noncall condition, within-subject.

Interns received 9 minutes to review a unique set of three cases during the testing day.  On the teaching day, interns received unlimited time to complete a free text web-based questionnaire involving 21 questions.  Interns were randomized by call condition to receive either “case set A” or “case set B.” We assessed case learning, call compared to noncall conditions, within-subject.

Dr. Mary Thorndike, Instructor in Medicine at Brigham and Women’s Hospital, and Dr. Ken Kehl, senior medicine resident at Brigham and Women’s Hospital designed these cases to approximate emailed sign-outs that interns send to one another when they transition from one-two service block to another.  Dr. Joel Katz, a residency director in the department of internal medicine, reviewed and approved these cases. 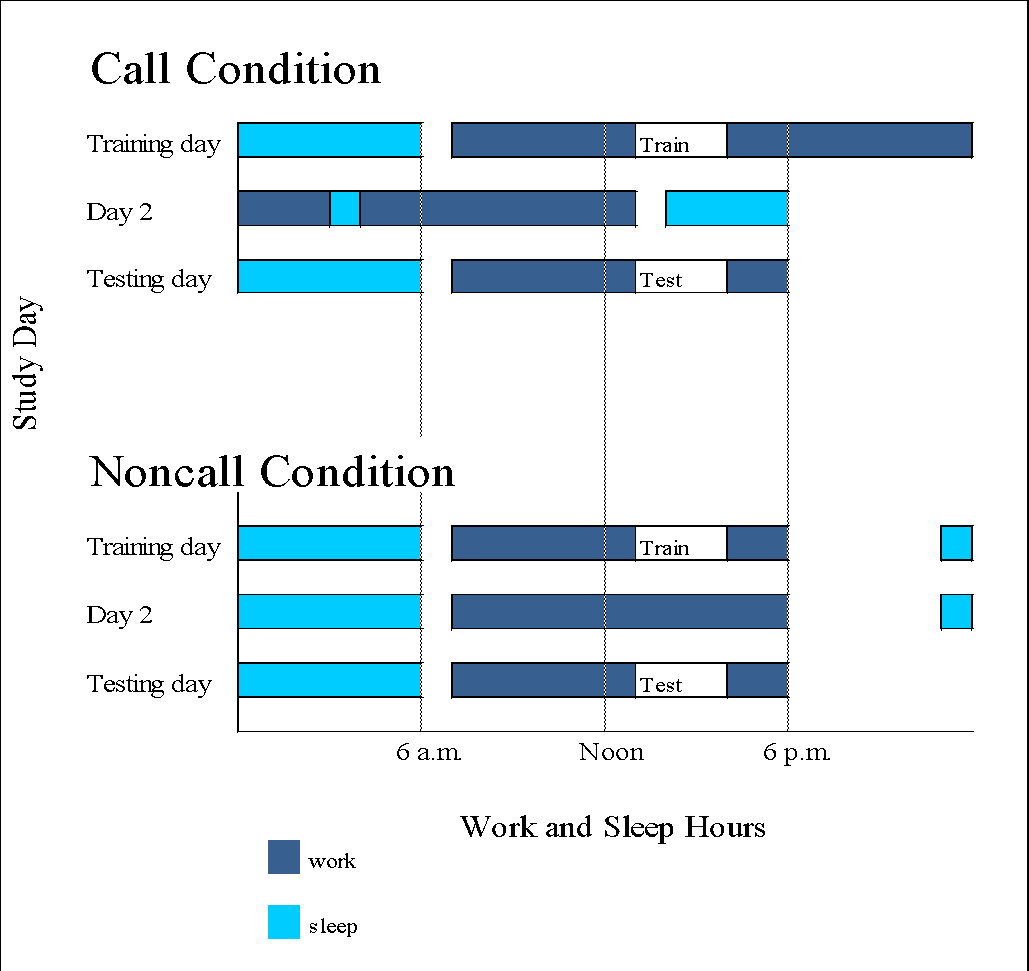 Figure 1: Sample sleep and work schedule of a single intern over the call and noncall conditions.

Top.  Before the call condition, the intern had two weeks of normal sleep leading up to the training condition. The intern then came into work, trained on four tasks, and subsequently worked overnight.  This intern had a brief bout of sleep during the call.  The intern completed call slept, returned to work on day 3, and underwent testing. Bottom: Before the noncall condition, the intern also had two weeks off the call.  The intern then came to work, underwent training, slept at home for the next two nights, and underwent testing on day 3. 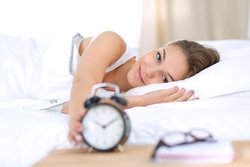